The Pyrenees mountains are famous for the Col du Tourmalet and its brethren, but they have a great deal more to offer if you know where to look

One click made all the difference. One step more zoom into the online map, and the madness of the trail revealed itself. Endowed of extra resolution, what was a dull straight line became a frantic series of switchbacks, the trail pinballing its way up through densely stacked contour lines at an improbable rate. In 4km it climbs 500m with no fewer than 31 switchbacks. Its name is Col de Liar and it had to be ridden.

Gravel is the hidden gem of the Pyrenees. While rightly famous for such breath-taking climbs as Col du Tourmalet, Aspin, and Hautacam, among many others, the unsealed roads might be the best of them all. It’s like a parallel dimension, a whole world that exists on the other side of a two-way mirror made of trees and grass and streams and all the other things that divide roads and those that ride them from immersion in the environment. 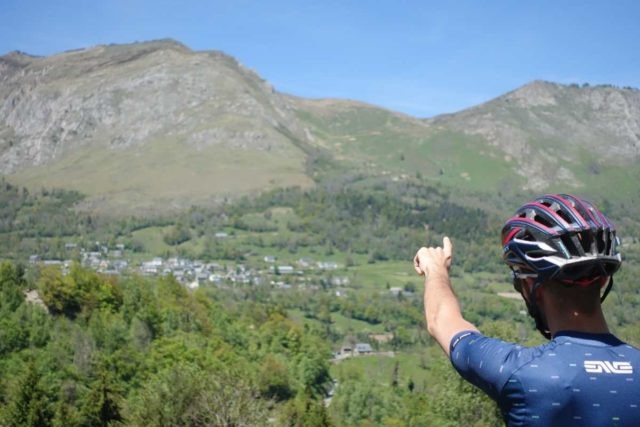 The high valley to the west of Argelès-Gazost has been ridden by the Tour de France peloton scores of times, and by countless thousands of amateurs heading to or from the Col du Soulor. We wonder, though, how many looked up to the north and spotted the Col de Liar, near invisible unless you know it’s there, like an old scar. This secret doorway opens into a gravel Narnia beyond in the Forêt d’Arragnat. There are other ways in, of course, though none is easy and the Liar, hardest of all, feels like a rite of passage. From Argelès-Gazost, it’s a steady 25-minute climb to the tiny village of Arcizans-Dessus; it’s the gateway to Liar and its road is the deterrent. It pitches up rapidly through 10, 12, 15%, breaking into loose gravel on two steep corners, suggesting we turn back. 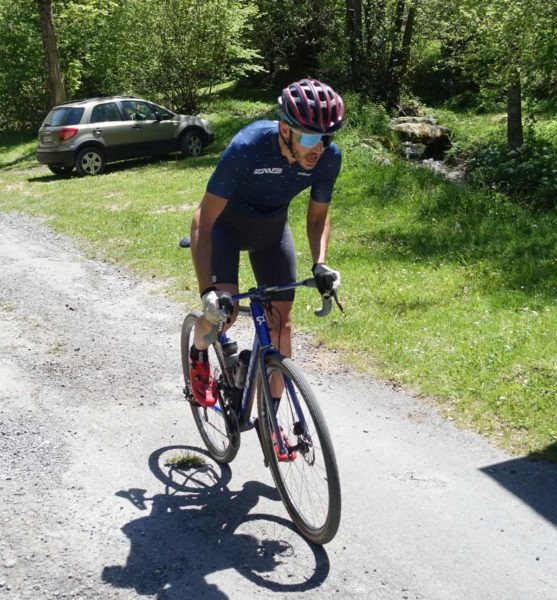 A final S-bend that must be 35% in the middle is survived only to gain a view of the final test, a 200m straight at a solid 26%. Short of rolling giant boulders at you, Indiana Jones style, it’s as dissuasive as you’ll ever find. Should you grit your teeth and push on, the physical toll ensures that there will be no fair fight with what lies ahead. 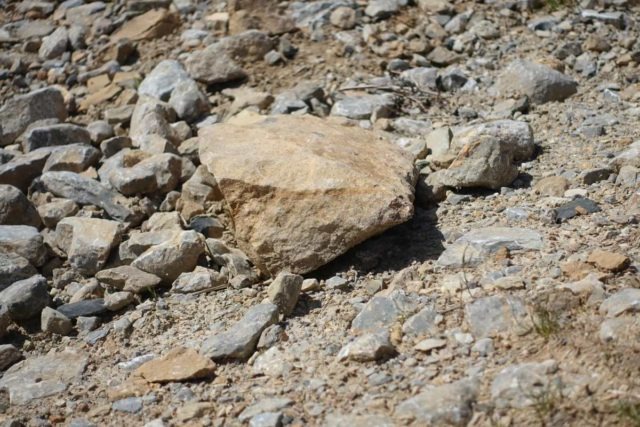 When the gravel begins, it’s rough, with fist-sized rocks offering no empathy to screaming muscles nor pounding hearts. Endure it for a moment, as firmer surfaces can be found in sufficient duration as to constitute some modicum of recovery. 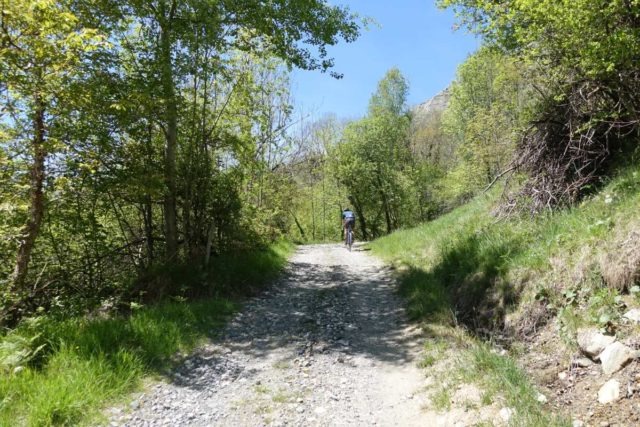 For half a kilometre the Col de Liar withdraws to a mere 12% or so, and the effort feels more sustainable, but it’s a deception worthy of its name. 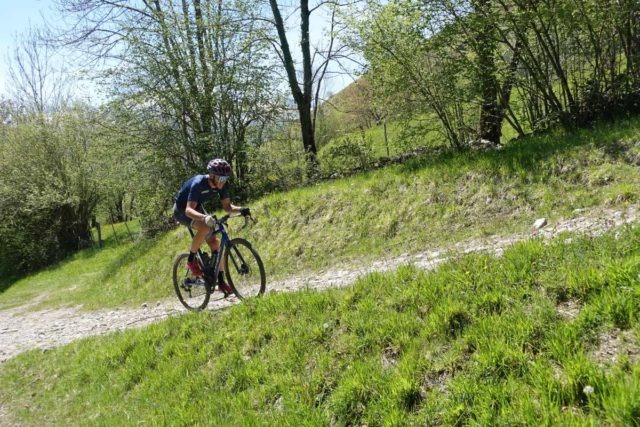 It ramps up again at 22%, this time on loose gravel that makes standing on the pedals impossible. The gradient barely eases as the surface switches to grass and then back to rocks, each providing relief from the other for a matter of seconds before their own particular flavour of agony is felt. The tightest hairpins are also the rockiest. Momentum is everything and line choice is critical. Any one rock could trip the front wheel or spin the rear, bringing you to a standstill. Take the corners wide and stay to the outside of the short traverses, where the crumbling walls of the cut track carpet the trail with the loosest rocks. It feels very close to the limit of what even this gravel bike could be expected to do. It’s a dream build totalling just 7.5kg and it climbs like a top-end road bike. While it might be more than you need to enjoy gravel riding, the superiority of the ride quality is evident and it laps up the rugged and vertiginous challenges of the Pyrenees. But it doesn’t mean it’s easy. Another section of grass radiates heat back from the sun and by now so much sweat is running into our mouth that it tastes like swimming in the sea. The gradient is unrelenting and even a 34×30 bottom gear ends up being ground around at 50rpm despite a big effort. Traction is a commodity that must be fought for with every pedal stroke, bodyweight a bargaining tool. The summit comes into view, half an hour since the suffering began, seemingly close yet still so much higher that it takes three more hairpins to reach it. Then, with a dozen more pedal strokes, the crest is reached. You can stand in one spot and see both valleys, and so we do, drinking it in. The Fôret d’Arragnat lies to the north, dense, dark green and devoid of denizens; to the south are the villages of the Vallées d’Arrens and Estaing, kneeling at the feet of the snow-capped peaks beyond them. The trail is altogether more affable on the other side – less rough and steep, more flowing – making for a fast and fun descent becoming of a gravel bike. We plunge into the forest, hard won altitude being frittered away like the family savings in a Vegas casino before a junction saves us from ourselves and sets us back on an uphill trajectory. After another half-hour of climbing, we pass the centre of the Val d’Azun Nordic ski area and cross the top of the Col de Couraduque road climb, literally within a few metres of the end of the tarmac, two worlds brushing shoulders, each oblivious to the other. Then, it’s steeply uphill again on rain-rutted hardpack. After two kilometres, the sky swells, the trees shuffle away like fair-weather friends in a crisis, and one more corner delivers you to a view of a geographic breaking point. The Forêt d’Arragnat lies between two giant ripples, remarkable for their parallel uniformity, a cartoonishly simple example of the formation of mountains by the collision of tectonic plates. They run east to west, rising a vertical kilometre. We’ve been riding the southern of the two, up its south face, over the top, along and back up its north side, and now we can see where chaos theory smashed its fist into the Earth’s crust and restored its randomised order to nature.

From the north, the Vallée d’Ouzom bisects the mountains, creating a passageway between the Pyrenees and the plains, one of vital import to residents – whether they make their living from the land or in the city of Pau 40km north – and to the Ouzom river, which might otherwise form an almighty lake, but which doesn’t appear of sufficient power to have carved its way free of the peaks. Then again, one mole could do a lot of digging in tens of millions of years. Rising up in the middle of this grand T-junction are the Pics de Bazès and Navaillo; out of sight far below them, as if sunken into soft ground, lies the town of Ferrières.

Less dramatic than the view but more tantalising, is a small wooden sign. It reads “Col du Soulor, 10km” and points to a gravel road that wraps around the side of the mountain. The sight of it gives an energy boost to beat any gel, and we launch into it, trying to savour the fast trail and the magnificent view but unable to do both at once. We climb again, passing a refuge hut and a small lake, aware of significantly less mountain remaining above us. And then comes the big reveal.

The trail turns left and suddenly there’s the staggering sight of the Cirque du Litor and Col d’Aubisque, three kilometres away. The precipitous pass is clearly visible and below is the Col du Soulor road climb, winding its way up from Ferrières. It’s like an out-of-body experience from road riding, which suddenly looks so constrained.

The café at the top is welcome respite. Other riders arriving by road appear perplexed by our mud-spattered Lycra. A second coffee is required before we feel sufficiently reinvigorated and we’re immediately back on Nordic ski trails, this time on the south face for a few kilometres before turning north again, over the Col de Soum and skirting just below the peak of the Crête de la Serre at the highest point on the ride, 1540m.

From here we ride the traverse in reverse, then bomb the steep hardpack to Val d’Azun, this time hanging a left onto the trail heading north and down into the forest. The seemingly ever-changing terrain switches to loose, grey slate which feels floaty and a little sketchy after the hardpack, but fast and brilliant fun. The trail meets the tiny Col de Spandelles road and there’s no option but to descend on tarmac. With the sun setting, temperature dropping and food used up, there’s just time for a quick exploratory diversion into the forest on the opposite side of the valley. By pure luck, we hit a great 4km climb, empty the tank charging up it, and make a mental note to spend a day there trying every offshoot trail.

Gravel in the Pyrenees is even more than a hidden gem; it’s a rich seam waiting to be tapped. The terrain has always been there, and now we have the bikes to unlock it. A new world awaits.

Should you wish to experience the Pyrenees by gravel for yourself, visit www.escapetothepyrenees.com