“Dan’s been welding all his life. Before he started specializing in titanium frames he worked on construction and special effects for film. You may have seen his work in Daredevil, Spy Kids, What Dreams May Come True, Once Upon a Time in Mexico, Face/Off, lots of LucasFilms projects, and a whole lot more feature films and commercials.” Dan is the Owner and Frame Builder for NTP

“One year he even built an airplane. It was a replica of a WWI biplane called the Vickers Vimy. It was featured in a National Geographic trip in which it recreated a 1919 race from England to Australia – the first of its kind. Dan was on that trip as the plane’s mechanic.”

“One of the things that trip did was make him think about the value of putting so much talent and creativity into building things for movies and watching them go off into landfill after the shoot. So he switched to building things that people love and want to keep forever. Bikes. Ti bikes.” The Nelson titanium gravel bike pictured above belongs to Rowie Jaron, a California resident who sought something different to the ho-hum selection of mainstream bikes. We think he’s accomplished that and more. The perfectly blended mix of orange / mango / tangerine and purple parts, decals and handlebar tape are a standout feature of Rowie’s bike, but so is the Fox AX Adventure suspension fork. More in line with the traditional look of a mountain bike suspension fork, the Fox AX centers around the company’s 32 Step-Cast chassis, but with 40mm of travel and a lockout. Rowie chooses a 1x / single chainring drivetrain for his NTP gravel bike. The RaceFace Next carbon cranks are 175mm in length, fitted with a 34 tooth RaceFace 10/11-speed chainring. Pedals are the Crank Brothers Candy model. Above, Shimano’s XTR Di2 derailleur is shipped stock with an orange anodized clutch on/off lever, but every other part and decal in this photo has been carefully selected. Enve rim logos, derailleur pulleys, thru-axle dropout and of course, the hollow pin / plate KMC X11 DLC chain. 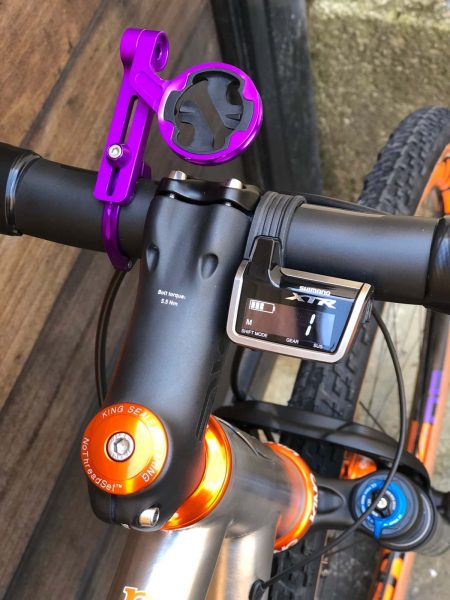 Above, a Chris King Mango i7 Inset headset. Parked next door to the 90mm long Enve stem is Shimano’s XTR Di2 Junction-A box, an item seldom seen on drop bar bikes. Di2 is a modular system and allows a decent amount of mixing and matching of parts. The XTR Di2 Junction-A box acts as a connector for Di2 wires, charging port and gear indicator. To be expected for a build of this caliber, Di2 electronic cables and hydraulic brake housings are internalized. Above, these King titanium cages differ just a little from stock.

Above, the geometry chart for Rowie’s NTP gravel frameset. The titanium tubeset on Rowie’s bike was sourced from Da Vinci Designs Inc (outside butted).