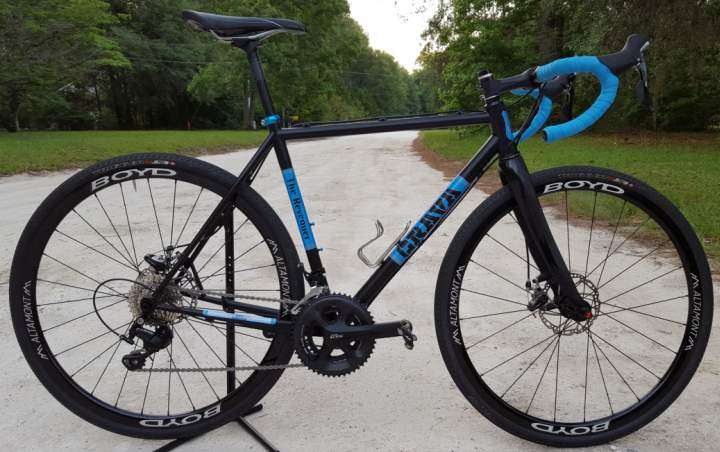 Grava Bikes of Lenoir, North Carolina, is a company with a simple mission. Create ONE bike that shines in all three disciples of drop bar cycling; gravel, pavement and cyclocross. Grava accomplished this goal with their first machine, the Maple Sally, a full carbon machine that conquers all of the aforementioned terrain. For 2015, the passionate crew at Grava Bikes are releasing a new model, The Revenuer.

The dirt and gravel roads near Grava’s hometown have a history affiliated with the production of moonshine, and the federal agents whose job it was to end these illegal activities. The agents were known as “Revenuers”, and this bike is a homage to those earlier times.

The Revenuer is a steel frame, handbuilt in Tennessee, USA, from a mix of Columbus and Deda steel tubing. Modern features such as thru axles front and rear, disc brakes, 44mm headtube for compatibility with tapered steerer tube forks, PF30 bottom bracket shell, full length, externally routed cables, all capped off with a durable powder coat finish in Model T Black, ensure this bike will treat you right for the miles ahead.

How does it ride?

My initial ride was on paved surfaces, with tire pressure set around 40psi front and rear. Between the tire pressure, frame material and wheels, I enjoyed a smooth almost Cadillac like ride that negated most of the bumps in the road I encountered along the way.

Don’t think for a minute this translates into a mushy, dead ride. With the stiff PF30 bottom bracket, there was no power loss or frame flex out of the saddle, and absolutely zero brake rotor rub, aided by the thru axles at both ends of the bike.

All power went into the drivetrain and onto the road; always forward motion. The front end of the bike felt equally stable, courtesy of the oversized headtube and marvelous TRP thru axle fork. I like an aggressive ride position, particularly when I’m on the drops. The bike is quick handling, but predictable enough to be stable at speed, especially when cornering or dealing with terrain of a more technical nature.

Further rides aboard the Revenuer involved a mix of pavement, limerock and gravel roads, and not-so-technical mountain bike trails.

This bike loves fast, hard-packed roads where the hammer can be put down. With the tire pressure dropped to about 35 psi, it got even better. I found the bike shines over rough and washboarded terrain, and while the tire pressure is one of the biggest factors, the bike felt planted at all times. Barring the biggest hits from an errant pothole, the Revenuer tracked predictably, even with my hands relaxing on top of the bars; a favorite position of mine. At around 22lbs in size Medium and the aforementioned component build with Shimano XT pedals, the bike isn’t considered a lightweight by today’s standards. However, I’ve learned over the years that bike weight is seldom a factor, particularly when you take into consideration ride quality, feel, reliability and overall performance. Not once did I give thought to the Revenuer’s weight, which incidentally could easily be dropped by converting the wheels to tubeless, and making a few component substitutions. In the world of gravel cycling, reliability is key!

Onto the trails, the bike capably handled everything I threw at it, barring log hopping, which is something I have zero aptitude for. With the quick handling mentioned earlier, the bike is easy to sling through twists and turns of a trail, aided by the excellent performance of the Spyre SLC mechanical disc brakes.

The Specialized Trigger tires (33mm) on the review bike are limiting in this scenario, but roll capably on dirt and gravel roads. I would prefer to roll this bike with one of my personal favorites, the Michelin Jet tire (tubeless), or for more width and an excellent ride over everything, the Clement X’Plor MSO. Speaking of tire width, the Revenuer has 44mm of clearance front and rear, which provides plenty of options for tire choice.

The Revenuer features full length shifter housing routing beneath the downtube, with the front derailleur housing wrapping under the bottom bracket shell to a stop behind the seattube, helping with mud protection and facilitating use of bottom pull front derailleurs. While internalized mechanical shifting looks neat, real world users and mechanics are aware of the pitfalls that often plague good shifting performance.

I must pass a huge thank you to J.D. of Bike Works in Gainesville, Florida, for setting up the 11 speed front derailleur / front barrel adjuster. 11 speed mechanical front derailleurs are a little tricky to setup, but this is no reflection on the Revenuer. The Revenuer eschews bad shifting performance. There are no gunked up housing linings to worry about, or extreme cable bends. Just plain, simple and reliable shifting performance at all times. The same can be said for the brake cable housings. The front brake is routed internally with minimal curvature through TRP’s new all carbon thru axle fork, while the rear is routed externally above the top tube, helpful for those moments when you need to shoulder the bike.

The PF30 bottom bracket shell ensures compatibility with most types of cranksets, including single speed with the appropriate eccentric bottom bracket. The Revenuer is a fast bike across most road surfaces, without losing on the fun factor, or trashing its rider after hours in the saddle.

Furthermore, the Revenuer is a sharp looking bike; from the Model T Black powder coat finish, to the neat blue highlights of the frame’s branding, it stands out from the sea of black carbon bikes.

While we cannot vouch for its performance at a local cyclocross race, if its performances on the local in-town trails are anything to go by, you won’t be disappointed.

The lads at Grava Bike are launching the Revenuer with the help of Kickstarter. Be sure to drop by the Kickstarter campaign, and consider ordering a bike, or supporting them with the other goodies available.

Alternatively, you may contact them with any questions you may have at the link below.